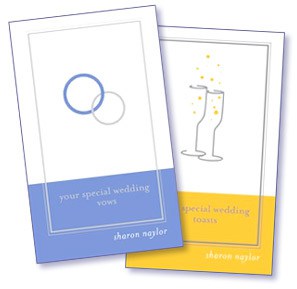 Get your copies here: http://www.sharonnaylor.net/wedtoast.htm

Here are the top 5 Toasts, in traditional order:

1. The Best Man’s Toast is still the first toast of the event — if you have more than one Best Man, they both/all get to speak briefly
2. The Maid/Matron of Honor’s toast — again, if you have more than one, each gets the microphone for a brief toast
3. The bride and groom take the mic to thank their parents and guests for sharing the day with them. This can be done after the first or second course so that there’s not a long procession of toasts at the start of the event.
4. The parents make a toast to the bride and groom, again later in the event (some parents opt to make this toast at the rehearsal dinner instead of during the wedding itself, since they don’t want to appear as ‘wanting a spotlight’ on the couple’s day).
5. The groom makes a toast to his bride (“Isn’t she beautiful?” or “Thank you for saying Yes”) and the bride may also propose a toast to her groom now. This one is proposed late in the event, often right before or after the cake-cutting.

[And an extra one…brides and grooms who have kids or are blending their families often like to propose a toast to their children, and we’re also seeing older kids and teens proposing toasts to their parents]

[We’re also seeing more toasts proposed from the bride and groom to the site staff, the chef, the wedding coordinator and other important wedding vendors who *really* did an amazing job helping to create a gorgeous wedding.]